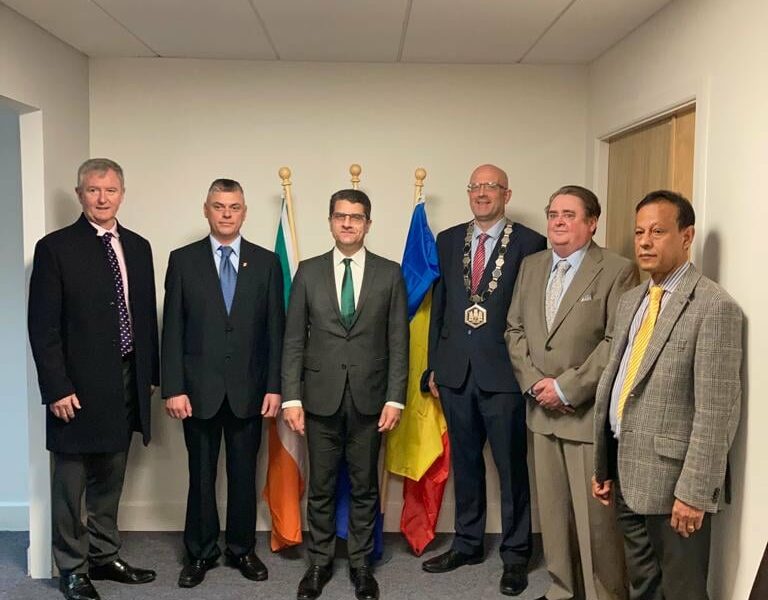 One day with the Romanian Ambassador in Kilkenny

On the 4th of November 2021 Twilight Community Group was the host of H.E. Laurentiu-Mihai STEFAN the Ambassador of Romania in Ireland, and his wife Georgeta Bratu.

For the first time in history, Kilkenny city was hosting a high rank official from Romania.  This didn’t just happen. Friday 1st of October 2021 Twilight Community Group was invited to meet the ambassador at the Embassy on 7th of October 2021. A delegation from Twilight Community Group hit the road to Dublin and went to present respect and to promote the community from Kilkenny to the Romanian officials at the Embassy of Romania on Waterloo Road. After two hours of conversation the meeting concluded with ambassador’s strong desire to come and visit Kilkenny. The delegation successfully convinced them that there is a strong community in Kilkenny with great initiatives under TCG’s motto: “Communities are stronger working together”. It was a memorable encounter. The Ambassador was impressed by the Twilight Community Group’s achievements.

They arrived at Twilight Community Group’s International Cultural House at10.00am. After the appropriate introduction to the members of TCG the Ambassador and his wife met with the other guest: Colm Ahern the President and John Hurley the Chief Executive of the Kilkenny Chamber of Commerce, Emma Murtagh – European programme Manager The Wheel, Betty Dewberry – Chairperson of the Older People Council, , Bortha Maria Woudsma-Public Participation Network, Salena Grace Manageress – Kilkenny Volunteer Centre.

Also present the past President of Areological Society Brendon Neary, whom has a strong connection with Romania, spending much time there. Stefan D’Oyle a Romanian born, Irish adopted with his wife and adoptive parents were in the companion of Ileana Conniff Baiescu the founder of ‘The never forgotten Romanian children’, and Kilkenny Garda officer Laura Dragoi.

There were connections made and strong links were established between all the parties present.

Stefan Cardare from The House of Pretzels offered the guests fresh from the oven Romania Pretzels (Covrigi) and Moldova shop had sent a beautiful selection of teas and cakes.

After interviews, conversations, and friendly encounters the moment of taking pictures next to the Irish, European and Romanian Flags was a fantastic moment. To see so much desire to be part of the mix and to see so many happy faces was an unimaginable site a few years ago. But there we were all under the same roof of Twilight Communities Group International Cultural House. What an achievement…

That was not all, the day was about to take a turn to more diversity after the ambassador and his wife went to Langton’s House Hotel where they were accommodated. After lunch in Langton’s the ambassador and his wife stopped for a coffee and chat at The Burger Factory and more, visited Butler Gallery, Kilkenny Castle, Kilkenny Salt Therapy and The House of Pretselz. At the invitation of the Florin Sima the owner of The Grapevine we stopped for supper and that was impressive and abundant.

The evening came to an end with a Jazz Concert were a Dublin based Romanian musician performed at Billy Byrne’s.

“Kilkenny was a remarkable experience. You can see how an open society works here, in which Romanians, Poles, Moroccans, Bengali & the African nations are well received, supported, and encouraged to set up their own business along the Irish people.”

As ambassador, Laurentiu Stefan was very impressed with Kilkenny’s Twilight Community Group, an association that focuses on diversity and promotes the social integration of those who seek a better life, far from their country, in Ireland. He met Martin Brennan again, the founder and soul of this association and his colleagues and many of those he collaborates with, such as those at Kilkenny Volunteer Centre.

There was also a good discussion with Colin Ahern and John Hurley, from the leadership of Kilkenny Chamber

A great joy was to meet Laura Drăgoi, who works in the An Garda Síochána, Ileana Conniff Băiescu who helps those who were adopted by Irish families in the 1990s to find their natural family. This is what happened to Stefan J Doyle Official, star today at X-Factor, adopted in 1990 from Satu Mare by an Irish family.

A big thank you to Liviu Iftime, the main organizer of our ambassador trip through Kilkenny, where he met also Mihaela Radu, the team of the manager of Langton House Hotel in Kilkenny.

We want also to bring to your attention the business of Ștefan Cadare the owner of  The House Of Pretzels (pretzels are a tradition in Romania), IonuțManole, who opened Burgers factory & more Ireland on the main street, and Florin Sima, who tried his luck (and succeeded) with a very popular Spanish restaurant , called The Grapevine. Finally, Adina Dascalescu and Oana Oana slowly imposed in Kilkenny the healthy salt therapy (a part brought from Romania, from Praid) in their “saline” from Kilkenny Salt Therapy.

The evening was completed by a jazz concert of the band of the Irish bassist Ronan Guilfoyle. And again, Romanians make us proud. Aleka Potinga, a cellist from Romania, a music teacher at schools and universities in Dublin, is also the vocalist of Ronan Guilfoyle’s band.

Thank you, Romanians from Kilkenny & Carlow” 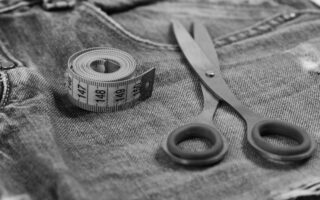 A Degree with Cop on! 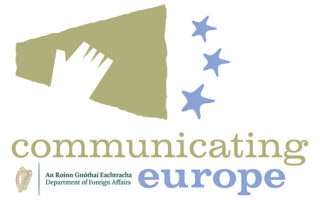